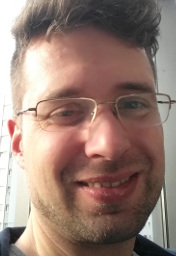 Welcome to my page! – I am a linguist doing research in the areas of semiotics, multimodality studies, and digital humanities. In 2010, I received my PhD from the University of Technology Berlin. From 2011 to 2013, I did research on topics in semantics and stylistics at the IUAV Venice. In 2014, I did a Postdoc research project at the University of Bremen, Institute of Applied Linguistics (John Bateman). Since 2015, I've been working as a postdoctoral researcher at the Institute for German Linguistics of the TU Chemnitz. In the area of gesture studies, our institute – lead by Ellen Fricke – belongs to the leading institutions in the world. Further focus areas are multimodal linguistics, semiotics, as well as empirical and computational approaches to virtual environments and multimodal interaction, all of which are highly innovative topics that are still underrepresented in Germany.

Upcoming: On June 5, 2019, I will give a talk on the gesture exhibition in Berlin and Chemnitz and on the impact of scientific research at the Centre for Multimodal Research, Institute of Education, University College London. Cf. also this somewhat related article on questions of impact in the influential London School of Economics impact blog: Maxwell, K., Benneworth, P., & Siefkes, M., (2018), Sandpits can develop cross-disciplinary projects, but funders need to be as open-minded as researchers. LSE Impact Blog, London School of Economics, 15.10.2018. License: CC BY 3.0 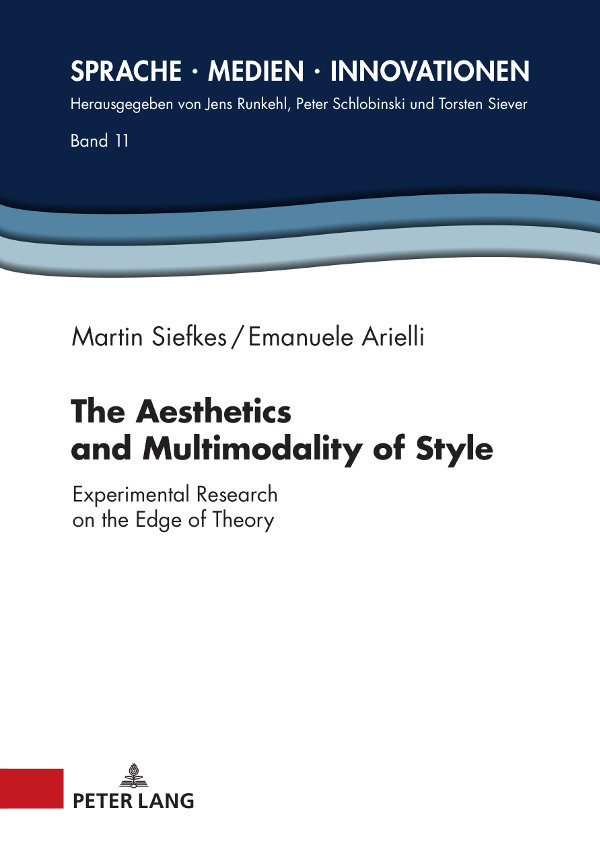 My new book, written together with Emanuele Arielli (Venice), has been published in July 2018. It presents an investigation of experimental approaches to style research, which are integrated on the basis of an interdisciplinary approach to style.

Style research has a long and venerable tradition, but its results are highly fragmented. Style exists in language and literature, art and architecture – but every discipline has its own theories. New approaches in empirical aesthetics and multimodality call for broader perspectives. This book offers an overview of experimental research on style, and proposes a common theoretical basis.

How do we perceive styles? How do styles change – and why? What is multimodal style? Are style and personality really connected? How is style related to aesthetic experiences? Which cognitive mechanisms are relevant for the creation and perception of styles? Are there neural correlates for style use? The book discusses these and further questions, providing researchers with a valuable source of new ideas.

The book flyer from Peter Lang provides further info on the content, available formats, and how to order the book.

[Nov 2017:] My new article Perceptual qualities of literary style investigates how we perceive literary style. In a series of studies, I have investigated how style-based attribution works. An important result is the empirical proof that we are able to attribute small fragments to larger novels, and to specific authors, on the basis of style.

Feel free to link to, or to otherwise share, the exhibition flyer for our unique exhibition on gesture in past, present, and future – the first-ever exhibition that traces human gestures as a means of communication from its relations to traditional crafts, to the future of gesture control. Don't miss it!

[Oct 2017:] New press release on our gesture exhibition in Chemnitz. The exhibition presents research results of the MANUACT research project (PI: Ellen Fricke) on gestures, their functions in human communication, and promises for human-robot interaction (e.g. communication with self-driving cars).

[Sept 2017:] Website for our exhibition “Gestures – in the past, present, and future” now online! – The exhibition will run from 17 November 2017 to 4 March 2018 at the Saxon Museum of Industry. It looks at the connection between gestures as a means of human communication, current changes in industrial production, and gesture interfaces that will shape our interaction with machines in the future. The exhibition presents results from our research project MANUACT.

[Oct 2016:] Back from the conference Transmediations! Communication across Media Borders, 13-15 October in Växjö, Sweden, which offered many fascinating talks and discussions. I gave a talk on virtual exhibitions. If you're interested in the conference, here are the tweets documenting it.

[Dec 2015:] Together with Ralph Knickmeier from the Digital Belvedere, I've developed the new “Digital Humanities” section of the German Semiotics Society (DGS). 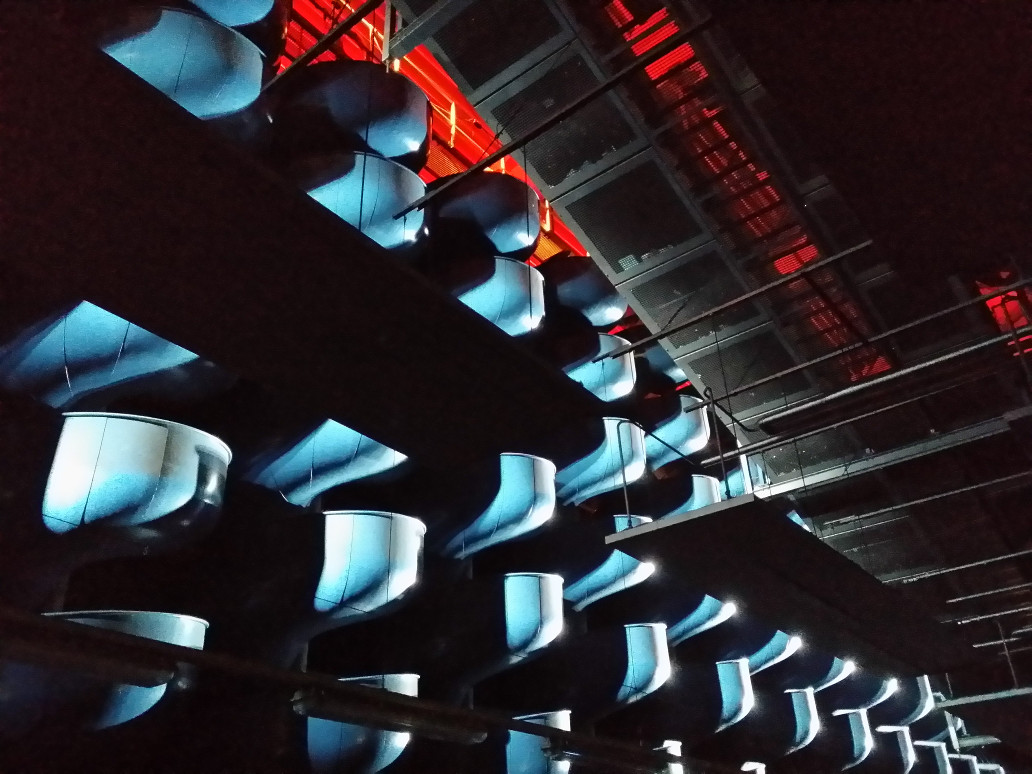 [Sept 2015:] The Ars Electronica 2015 gave me some new thoughts, especially regarding my work on intermodal relations.

[Aug 2015:] Editor of the Zeitschrift für Semiotik: I've been offered to edit the ZSem together with two great scholars, Roland Posner and Ellen Fricke. Working closely with two world-famous semioticians (Ellen is also a leading gesture researcher) is an honour – it will be inspiring and lots of fun!

[June 2015:] Together with Ellen Fricke, I'll be at the workshop The Foundations of Linguistics. Languages as Abstract Objects in Braunschweig, where the new paradigm of „Realist Linguistics“ will be discussed. Here's our abstract. The workshop has a very impressive line-up, and I'm excited to meet those people and discuss with them!

[May 2015:] Quo vadis, semiotics? A discussion [German] of current criticisms and perspectives of semiotics. The validity of semiotic approaches has been criticised in philosophy, image studies, and aesthetics. At the same time, a revival of semiotics is taking place in media, gesture, and film studies. 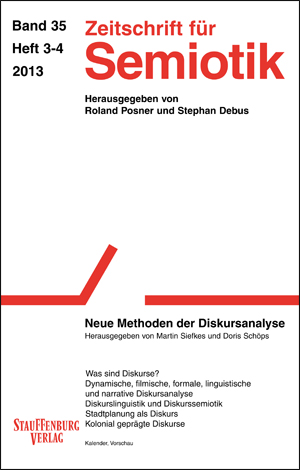 New article on keimform.de [German]: how can we generalise the principles that work so well in Free Software and Free Culture? Material peer-production, such as Open Hardware, FabLabs, and Hackerspaces, is rapidly growing. I've developed an idea on how such projects can cooperate. Let's take production in our own hands!

[Dec 2014:] For all who work in discourse, text, or film analysis and have some German: the Special issue “Neue Methoden der Diskursanalyse” of the Zeitschrift für Semiotik is now available!

Publisher's page with abstracts [EN / GE] of all contributions

On 330 pages, in 10 original research articles and a thorough introduction, innovative theoretic approaches and empirical applications in the field of discourse analysis are presented, and linked on the theoretical foundation of Linguistics, Semiotics, and Multimodality Research. Topics include quantitative film corpus analysis, visual and multimodal discourses, use of software for discourse visualization, formal discourse analysis, (post)colonial and metropolitan discourses. I've developed and edited this issue together with Doris Schöps. Here’s the introduction [DE].

[Sept 2014:] I've been awarded the DGS-Förderpreis 2014, and feel greatly honoured! The ceremony will be on Sept 24th in Tübingen, as part of the general programme of the DGS congress.

[May 2014:] What happens when language, moving pictures and music interact in the perception of films? How do we interpret the relations between pictures, text and graphics in print media? Multimodality, the integration of various perceptual or semiotic modalities, is of growing importance in linguistics and semiotics; most texts and media in today’s cultures are multimodal. – Two important conferences on multimodality are scheduled for september 2014: an interdisziplinary conference at the University Bremen (10-13/09/2014) organized by Janina Wildfeuer, and the Multimodality section of the IASS congress in Sofia (16-20/09/2014) lead by Roland Posner, the famous German semiotician. Send us your abstracts, or come as a guest – it’s a fascinating topic!

[Sept 2013:] A new article of Deutsche Welle online [DE] considers different aspects of the diary of Johannes Spiecker. The article reflects on Spieckers role as a witness of the Herero and Namaqua genocide. Hopefully, it will help to bring the topic back into public awareness. Sadly, no material in English yet exists apart from this short overview, but I'm working on an English-language paper on Spiecker's diary, focusing on the question of genocide and the new hints and information on this topic in Spiecker's diary (which is rare indeed, if one thinks of the scarcity of sources on this topic in general).

[June 2013:] My new book, „Sprache, Glaube und Macht“, has appeared; it deals with German colonial history in West Africa from the perspective of discourse analysis and cultural science. More information on the book is available here. You can order it from the publisher, buchhandel.de, Amazon, or in your local bookstore.

On June 1st, 11.00 a.m., the Afrika-Haus Berlin presents the Diary of Johannes Spiecker, an important historical document recently published for the first time (more on the diary can be found here). I will read passages of the book and answer questions (press release).

[Feb 7, 2013:] A new essay [DE] which explains some points of the semiotic style theory I've developed in my doctoral dissertation.

[Dec 11, 2012:] At Dec 6, at the Technical University Berlin, a festschrift for Prof. Roland Posner was presented to the public, with contributions from scientists from a number of fields, many of them well-known experts and including a number of former students and colleagues, who deal with different aspects of his work. On this occasion, I've held the laudation [DE], which introduced his most important theories in linguistics, semiotics, and culture science. (More information on the festschrift volume can be found here, lowest entry.)

[Feb 2012:] Don't miss: an interview with Bernie Horowitz about the unpublished recordings of Vladimir Horowitz and what might be done to preserve them.